Men fake it too 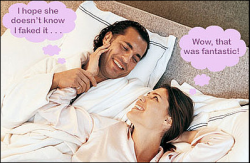 It has long been known that women can and will sometimes fake an orgasm. I think that it is terrible practice; it sends all the wrong messages and gives false feedback that can cause the two sexual partners to becomes stuck in a loop of bad sex. Example:

This is a really bad cycle to hit, and the best way to avoid it is to never fake it. Admitting you faked it afterwards is a really hard thing to do, so the best thing is do not put yourself in that position in the first place. Just don’t do it. Never fake it ladies. NEVER.

It is easy for girls to fake it, as sometimes it is really hard to tell. If the girl has gotten really super wet in the lead up, and is warm and inviting, unless she is one of the super rare squirters that exist in the world, her coming is more in the body that in the juices. When she starts to moan, writhe and wriggle with orgasm it feels the same to the man if it is real verses if it is fake. It is really hard to tell, but with a man it is easy to tell, right? Or is it?

What people don’t realise is that there is coming and that there is orgasm, and that they are two very different things. When a man comes he shoots his load, and that is really clear and obvious. Usually this means that he has also had an orgasm... however this is not a guarantee. A man can come without orgasm, he can shoot his load but not actually hit the mind numbing pleasure that is the orgasm that you want to come with it. When this happens, it is even easier for the man to fake it. The visible signs are there, he is in the act of having sex and the woman is distracted by the penetration, it is all too easy to just make an appropriate noise and let the woman think that you hit your ecstasy when you didn’t.

Men – don’t do it. Don’t fake it any more than you would want the ladies to do it. You risk hitting the bad sex cycle, and you don’t want to be there.