Why use a condom with your fuck buddy. Two compelling reasons 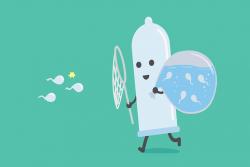 When it comes to having sex, there are many people that prefer to not use a condom. For the most part the preference is on the male side, so this article is aimed at men, but I want to note that there are also many women who also prefer to have sex without a condom. I have certainly spoken to at least one woman who claimed that they couldn’t come if the man was using a condom. Whether that was a physical restriction based on sensation, or a mental block caused by their belief that they could not orgasm when a condom was being used I am not sure. Either way, she was very keen on anyone that she hooked up with to be without a condom when they had sex. As a result she had to take other preventative measures, mostly testing for STDs beforehand, which meant she rarely had sex with a fuck buddy on the first night. It also meant that her friends with benefits relationships tended to last for a long time since the effort to first test and check meant that she couldn’t easily swap men in and out of her bed, so there was a balance there. So that was her. From a male point of view, why should you choose to use a condom with your fuck buddy even if they would rather you didn’t?

This is the most compelling reason. A condom assures that you will not pick up anything untoward. Nothing will kill your sex life faster than having to say to someone you are about to sleep with that you have caught “xxx” and need to use a condom. It is just bad! Some STDs also have long term effects (the HIV virus being the main one) and even the more malign ones require embarrassing treatment and appropriate disclosure to the people you are sleeping with at the point that you catch it. The easy way to avoid all of this? Use a condom.

Have you ever had a pregnancy scare? Have you ever had sex with someone and then afterwards there been the suggestion that they might be pregnant? That could have been a late period or a miscommunication, but if you have you understand the issues that can cause. Getting someone pregnant is messy. Worse, if you decide that you do not want the child, but the other party does, you have no control over that but remain legally liable for the child! You are compelled, by law, to provide a certain amount of financial support for that child. A condom gives you the certainty that this will not occur. Even if the woman says that they are using some other kind of contraception, can you be sure of their honesty in this? Men have been caught out by this in the past, don’t let it be you!

So, when you first start sleeping with someone, I strongly suggest you use a condom regardless of how the other party feels about it. Do it for you, for your protection. That way you can walk away at any time knowing that nothing is going to come back and haunt you from what was intended to just be a night of fun for both parties.