Why Sex Makes You Smarter 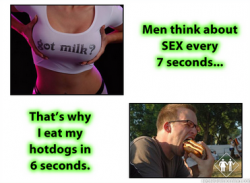 Someone once told me that teenage boys seem stupid because their every profound thought is interrupted by the thought of sex - a thought that occurs to them every 7 seconds, according to popular opinion. 7 seconds is hardly enough time to complete a dignified thought: The state of the government in the Wes-* SEX! Does true love ex- SEX! The solution to the refugee crisis mus-SEX! While this is probably a gross exaggeration, it is likely also rooted in the truth that sex is distracting as hell - to all of us. It’s a pleasure so base and animalistic that it has inspired lyrics such as ‘let’s do it like they do on the discovery channel’, without anyone ever wanting to insert intellectualism into it. And, yeah, most of us spend much more time thinking about sex than politics, or philosophy (unless we’re talking about sexual politics of course). And this straight-up fun, light-hearted (yet sometimes hot and heavy) feel of sex is one of the reasons most people can’t get enough of it.

However, just because sex feels amazing, allows you to let loose and be as insensible, irrational and unintellectual as you like, someone who wants and likes a lot of sex is by no means less smart than someone who would rather spend the night with a book than a lustful lover. In fact, you could argue that having a lot of GOOD sex (sex that both parties enjoy) can actually make you smarter. By learning the art of seduction, the cues of what your partner likes and dislikes and gauging how turned on the other person is, you are cultivating skills that contribute to social and emotional intelligence.

Say you’re trying something you haven’t done before - touching your partner with a new intensity or a rhythm, or with a different part of your body. A ‘smart’ lover can clock if their daring is being received well, by being able to understand the significance of the direction of their partner’s gaze, a change in their breathing, or the openness of their body language. This social intellect is not only useful in bed. Being able to read these cues can help in professional environments, in creating friendships and in any other type of relationship. But most importantly, it’s a beautiful cycle - having lots of sex can make you smart, which in turns makes you more attractive... which will inevitably lead to more sex. There’s no way to lose!