It is always awkward the first time: Feel the fear and do it anyway 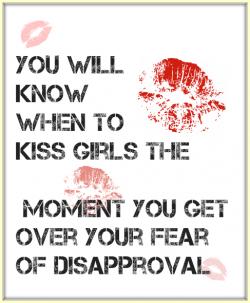 Recently I had a friend of mine, (well actually an F-buddy f mine) talk about one her friends that doesn’t want to tell his f-buddy that he likes her. What he said was that it feels uncomfortable to say it, so even though he feels it he doesn’t want to say it. This got me thinking – everything is uncomfortable the first time, you just have to push through and do it anyway! Let me expand on this.

Back when you were a wee little person and completely new to girls/boys, if you liked someone even talking to them felt uncomfortable. Eventually you got over it, but the way you got over it was that eventually someone or some situation pushed you into talking to the opposite sex. It was super uncomfortable the first time, but then after you did it the next time is was less so until it became normal.

Your first kiss – if you remember it – was guaranteed to be awkward! I would bet money that you as a reader had a not so great slightly uncomfortable first kiss. How do I know this? Because until you have done it – or course it is awkward! Once you have “done it anyway” only then can you move on with starting to really enjoy kissing and getting good at it.

Your first fuck – damn this was awkward! Of course it was! You were all nervous and fumbling around. You knew what you were supposed to be doing (kinda) but it was all theory and no practice. Your body new it wanted to have sex and do it, but you didn’t understand the mechanics so of course it felt odd... and here comes the key thing – you did it anyway! You pushed through and now you are a sex god! You know how to have sex and you are ready to dispense the blessing of your touch to all that wish to receive it – as long as they are hot enough. You would never have reached this unless you had pushed through and just done it anyway the first time.

What I am trying to remind you of is that you have already done this a bunch of times and felt the benefit. You have already felt the fear and done it anyway and your life is better for it. So if there is something that you want to try with your sexual partner but are a little too nervous of approaching it because it feels awkward, then get over it. Feel the fear of it, then do it anyway. You know that it will work out for you.